There is a window outside my cell. It faces the West. In the evening hours of each day the last sun rays beam inside my cell shining upon the bars casting an equaled measured line of shadows upon the back wall of my cell. It is said ‘Do not watch a clock, because you will never see it move.’


Here, on THE ROW, times stands still for no-one. You can literally see the shadows of bars slide forebodingly, across the wall.

There is a maniacal passion about each day. It is a brash, boastful, facade you see on the face of every MAN here. With the passage of time their demeanor becomes even more animated. The laughter is just an octave too loud, imperceptibly forced. As if to live each day to the fullest, because the march of shadows never cease. Time is the enemy here. Every man faces it. The marching of incessant time means only one thing: appeals are running out. With each seasonal change comes one more denial from the courts. Laughter becomes a little more strained. Attention spans get a little more shorter. It is as if a playing disease has come. Men begin to distance themselves for fear of contamination. The Plague of Death be upon you. Everyone can see it.

Appeals have run out. The laughter fades away. Time is reduced to hours. Then minutes. Then seconds. Then none. The purest form of reality to be seen is when a man looks you in the eyes and tells you his appeals are over. He is done. Life is hanging by a thread...

Read the full text by downloading the complete version:

It is not hard to conceive how freedom can mean so much to someone held under such depriving conditions. So much so that captivity of a pet becomes abhorrent. The desire to connect with something, anything, but refusing to hold that something against its will. Preferring to live alone rather than subject another life to confinement.

I exist within these walls. Two meters by three meters. I am regularly visited by all sorts of critters. Frogs, toads, crickets, beetles, ants, a snake once and spiders. Most men capture these critters and build lovely little homes for them. No matter the beauty of the home, it is still merely a box, a cage. Depriving the critter of freedom.

This is the story of Charlotte. She is a beautiful spider. A Granddaddy longlegs. I awoke one morning to find a new occupant in my cell. This was nearly three years ago. I named her Charlotte, after the story I loved as a child, “Charlotte’s Web”. When Charlotte first appeared in my cell, she was too small for me to determine gender.

I refused to catch her and put her in a lovely box. I watched her intently, busy as she created her web. Upon completion she moved to the center of her new nome and waited. As the days passed I grew anxious as I watched her body slowly decrease in sieze. I knew she was hungry, yet she refused to leave and find better hunting grounds. I decided if nothing would fly into her web, I would feed her myself. The smallest of insects I would catch and toss them into her web.

The first was a small common-house-fly. I watched her rush to it and quickly wrap it into a web such as a cocoon. She fed upon it until it was a mere husk, then delicately tossed the husk out of her web and repaired the damage to her home. She returned to the center of her web and splayed out her tiny legs. Miraculously her tiny body took on the weight of the fly. I felt she was satiated and happy with her choice of deciding where to make her home.


Time passed and I watched her grow. She became a beautiful spider that I eventually could identify as a female. At times, during the winter mostly, food would become scarceness. In one such period I feared she would leave me, because I could not provide for her. It was a long cold winter with no insects to be found to feed her by. I watched her little body slowly melt away with each passing day. I just knew one day I would wake up and she would be gone. (...)              Read full text by downloading "Free": 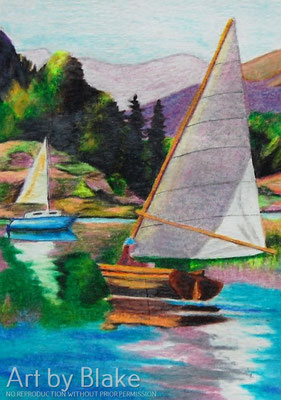 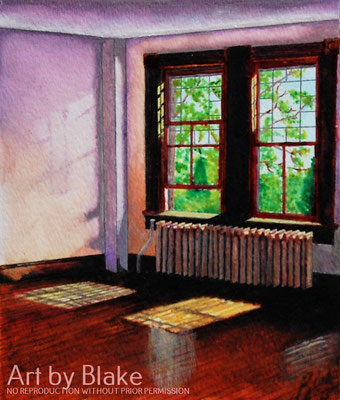 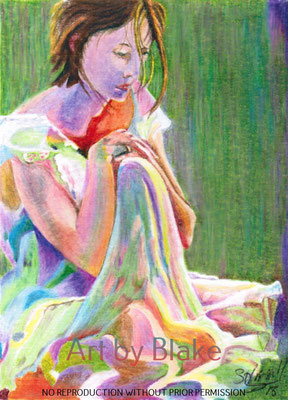 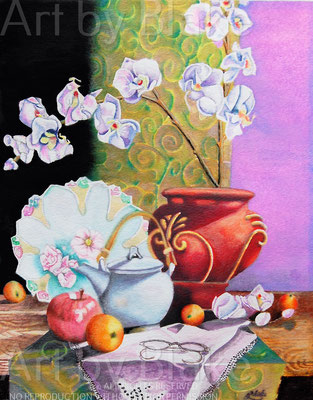 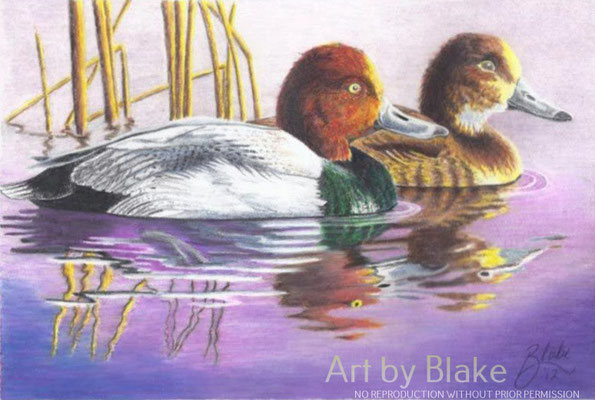 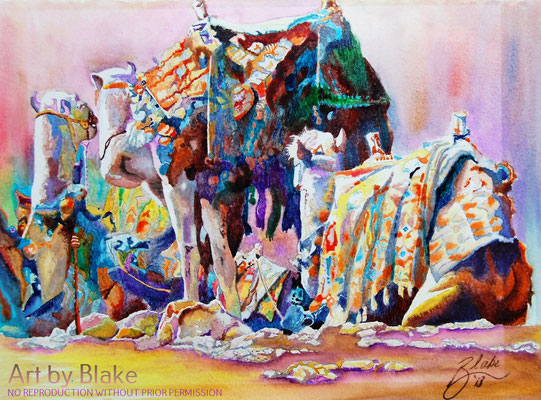 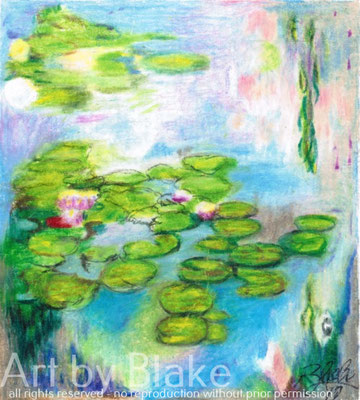 ©  ART BY BLAKE & SHAMTARA - ALL RIGHTS RESERVED: IMAGES AND TEXTS MAY NOT BE USED IN ANY MANNER WITHOUT PRIOR PERMISSION